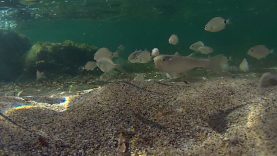 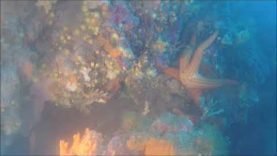 Echinaster sepositus, the Mediterranean star red, is a species of starfish from the East Atlantic, including the Mediterranean Sea. Echinaster sepositus has five relatively slender arms around a small central disc. It usually has a diameter of up to 20 cm, but can exceptionally reach up to 30 cm.  It is of bright orange-red in colour. The surface is dotted with evenly spaced pits from which the animal can extend its deep red gills (papullae). Common throughout the Mediterranean Sea up to 200 meters deep, it can be found both along the surface of rocks and between Posidonia beds, but not at temperatures above 22 ° C. Stella Marina Mediterranea intotheblue.it

Starfish or sea stars are star-shaped echinoderms belonging to the class Asteroidea. Common usage frequently finds these names being also applied to ophiuroids, which are correctly referred to as brittle stars or basket stars. About 1,500 species of starfish occur on the seabed in all the world’s oceans, from the tropics to frigid polar waters. They are found from the intertidal zone down to abyssal depths, 6,000 m. below the surface. Starfish are marine invertebrates. They typically have a central disc and five arms, though some species have a larger number of arms. The aboral or upper surface may be smooth, granular or spiny, and is covered with overlapping plates. Many species are brightly coloured in various shades of red or orange, while others are blue, grey or brown. Starfish have tube feet operated by a hydraulic system and a mouth at the centre of the oral or lower surface. They are opportunistic feeders and are mostly predators on benthic invertebrates.

Several species have specialized feeding behaviours including eversion of their stomachs and suspension feeding. They have complex life cycles and can reproduce both sexually and asexually. Most can regenerate damaged parts or lost arms and they can shed arms as a means of defence. The Asteroidea occupy several significant ecological roles. Starfish, such as the ochre sea star (Pisaster ochraceus) and the reef sea star (Stichaster australis), have become widely known as examples of the keystone species concept in ecology. The tropical crown-of-thorns starfish  (Acanthaster planci) is a voracious predator of coral throughout the Indo-Pacific region, and the northern Pacific sea star is considered to be one of the world’s 100 worst invasives species.

Most species are generalist predators, eating microalgae, sponges, bivalves, snails and other small animals. The crown-of-thorns starfish consumes coral polyps, while other species are detritivores, feeding on decomposing organic material and faecal matter. A few are suspension feeders, gathering in phytoplankton; Henricia and Echinaster often occur in association with sponges, benefiting from the water current they produce. Various species have been shown to be able to absorb organic nutrients from the surrounding water, and this may form a significant portion of their diet. Stella Marina Mediterranea intotheblue.it 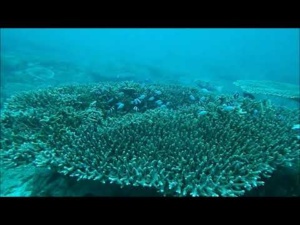 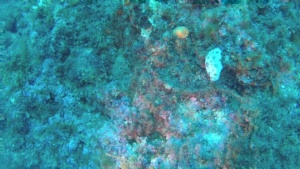 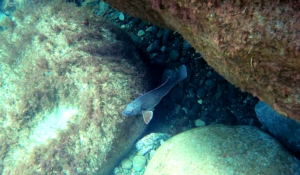 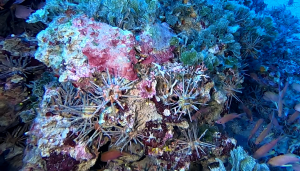